Three and a half days – that’s how long I was away – three and a half days. The way Benji reacted you would think I have been away for three and a half years. He went absolutely ballistic – the WaWa wanted to say hello but he charged right at her and knocked her out of the way to get to me. I had to sit on the floor  and try to attend to both of them. It took us ages to get Benji to calm down and he ran around the house like a mad thing, and heaven help anyone – including a WaWa – that got in his way. This is the longest I have been away from him and Annabell tells me he was not a happy puppy. Since I came home, he has hardly left my side. Odd thing is that as soon as I go to bed he jumps down from the bed and goes into his own bed and no amount of coaxing will get him back up beside me again – although he does stay on his bed and watch me, which is odd – very.

Generally I have taken Benji with me when I go out – provided I am not going to be too long – and leave the windows partly open and he enjoys the drive. He is not a 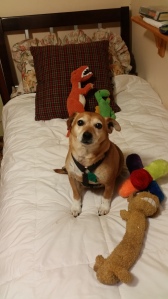 demonstrative dog so he is not up at the window or sticking his head out, but he just  curls up quietly on the seat. I mentioned this to Annabell and her comment was that he’s with his daddy, so he’s quite at peace curled up. However, as the weather gets hotter I can take him out less and less – example was Thursday when the temperature topped 37c. Much too hot to take him out and leave him in the car – even with windows open. Driving is ok – we have the A/C on when we are driving and we did go down to the beach for a walk and some Ice Cream. I am not sure if dogs are allowed Ice Cream, but he enjoys it  and I enjoy my  Cornetto.

Now that the weather is hotting up I hope to get outside more and get some work done. Sounds strange working in the hotter weather but up here that means very little wind and you can do a lot when there is no wind. I have plans for part of the area and although I have a picture of what it might look like in my head ( that’s a worry!) I just have to wait and see it it works out. I am part of the way into the plan in that I have cleared the area and laid down weed matting and ordered the artificial turf. But then as the poet ( Robert Burns) wrote,  “The best laid plans of mice and men go aft agley and leave us naught but grief and pain for promised joy”  and what all that means is that that’s the end of the hot to warm weather for at least the next ten days, back to rain, wind and cool days until at least early December.

Generally the family all come over here for dinner on a Sunday. It has been this way for  years.   However this Sunday Andrew called and said that we were to come to his place for a Barbecue. We chatted around while everything was cooking and  when we sat down at the table Andrew got the wine, poured a glass for me, poured a glass for John and was going to pour a glass for Patrica (Trish)  when he  moved the glass away and said quite clearly “no you can’t wine – you’re pregnant”.  Talk about dropping a grenade on the table!! Annabell  was sitting next to Trish  and hugged her, Trishs’ mum  just burst into tears, my word but it was an interesting meal – and of course – at the end of the food we got to see the scans over coffee. The baby should be born late May, early June – we think she is about 12 weeks.   I never thought this would happen and I told people  “That ship has sailed” It seems that there is yet another tide.

4 thoughts on “Weather, Mice, Men and May Babies”