For more years than I care to remember I have used ring planners. For a period I went through the Palm Pilot craze but in the end I came back to paper and ringed planners – mainly Filofax. Of course my planners did not survive the move from Scotland to South Australia being limited in what we could bring (weight) However,  like much of our things they were packed in Tea Chests and stored in my Father-in-law’s cellar. The idea was that once we were settled we have the teachests sealed and shipped out to South Australia. Sadly after we had been here a few months and were starting to settle down,  my in-laws house was broken into and most of the things from the cellar were destroyed or stolen, that also included all my photography equipment and the photograph

albums. The photographs were of no use or importance so we suspect they were dumped in the  nearest safe trash bin. Very little of the crystal and none of the silver we had been given as gifts remained. None of my  planners remained. The thing that upset us the
most was not the glass or silver or photograph equipment, but rather the photographs themselves. We have no photographs of the
boys as babies or little children other than what we have  taken in Australia. Before we left Scotland Annabell and I took the boys all over the country and took photographs of them at various places, Fort William, Loch Ness, Stirling Castle, Edinburgh Castle and Mons Meg, Sweetheart Abbey, Jedburgh Abbey, St. Giles Cathedral, Elgin Cathedral, 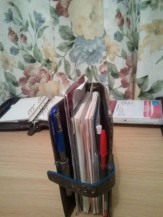 Dornoch Cathedral and Dunblane Cathedral, Paisley Abbey and Dunfermline Abbey,  Bannockburn and Robert Bruce, Duart Castle, Loch Earn, The Rannoch Moor, Glencoe and, of course, Glasgow Cathedral and other places too numerous to mention.   Photograph of Annabell’s family and my family – all gone.

Here in Australia the Palm Pilot was the thing so I went through a Palm Pilot phase and I think I still have a couple hanging around somewhere. But I tired of that and went back to  Ring Binders again. I have been there ever since. Generally I used a Filofax and did so up until a few years ago when I  started to use  an Organizer from a Dutch company called Van der Spek. Generally I change my Organizers/Planners every two years and I have just ordered my third  Van der Spek and for the very first time ever, I have chosen something that is neither black nor brown. I have chosen a colour called  French Blue. People thought I was being silly when I asked what colour/shade French Blue is as there are so many shades of Blue. All I got in reply was “Blue” which didn’t really help.  It should be here in a few weeks and I am anxious to see what it looks

This time last year I had great hopes for the coming 2016. I had lost both Chienne and The Man and there was still much sadness there but there was Benji and I looked forward to life with him.  I  suspect one day I will get out of the habit of referring to him sometimes as Chienne. There has been much sadness in 2016 but there has also been joy and I will see the year go with mixed feelings. My one shining light has been Benji – as it should be. I have lost friends this year, some fur-friends, some human friends, some who have passed and some I have just lost and they are the saddest of all. But I have also found new friends and that helps with the sadness of loss.  Again I look forward to the coming year and hope that 2017 will be a better year, but like all years there will be a mixture of joy and sadness, laughter and tears,  but we need them both, one to balance the other,  and all we can really hope for is that the joy will be more than the sadness and the laughter greater than the tears.

I have no doubt that there will be other posts between now and the end of the year, but for now, I want to say thank you to all of you for being here and for your lovely comments and conversations. I hope we can share 2017 together.

6 thoughts on “Looking Back – Looking Forward”