Tuesday the bark was removed and it was my intention to go out and start the tidy up and levelling off. However, in the morning it was blowing a gale and in danger of creating a dust storm so I decided not to add to the problems by stirring my stuff up . I had to go out for a little while and when I came back I was horrified to see that the wind had blown open the gate. Chienna was still there but the little man, my Maltese,  was gone. I secured the gate and took off in the car to drive around the area looking for him.  Couldn’t find him so I came home, only to see him walking, unconcerned, up the driveway. I stopped the car on the roadway and went over and lifted him up. I was just so relieved to see him.   I picked up herself from her meeting and took her to lunch – then the heavens opened up and we had a real good thunderstorm. Got back to the house and Chienna was going gaga. I had to medicate her to calm her down. The thunder terrifies her and the medication from the Vet is to  relief the stress and calm her down. We find half a tablet is enough – poor thing. The thunder lasted well into the late evening.

The storm cleared and headed off to wreck havoc in Adelaide – or so the news tells us. Tomorrow is forecast to rain so I don’t know when I will get back into the garden and get things cleared up. A less than good summer and now an Autumn that seems to be headed in the same direction – cool and wet. I’m a simple person and I really don’t understand such things, but the weather institute tells us that the last two years are the coldest Australia has been in ten years – they also been the wettest, but overall we’re getting warmer. All very confusing. Interesting though that Wednesday lived up to its name ‘Wet Wednesday” 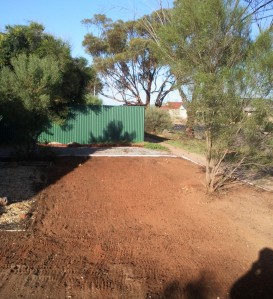 If  it stays dry I should get the trailer filled this afternoon and  get it ready to get off to the dump tomorrow morning – early – like opening at 8:30. I try to get in as early as possible when I am on my own because I am not really good at backing trailers. I’ll do the final measure for the edging shortly and order that for tomorrow after I clean the trailer. Should be another busy day.