Yesterday was an odd day in that I was able to post things and get most of the mail through. Today it is a different story. Today there is no mail, no internet and no telephone. I think the clean-up has started today in some areas. We still have 22 major electricity pylons down so that being so I  suppose that we should be considered fortunate that we have power for lighting and heating. The Broadband network and the mobile (Cell) phone network are both down. At the moment I am using MS Word and will transfer this to WordPress when the system becomes available again.

The storm may have eased in this area but it still continues in Adelaide and the South East . We  have TV and I just saw on the news that a man believed that warnings didn’t apply to him and he tried to drive through flood waters – and yes, he had to be rescued .   I think the amazing thing about all of this is the fact there has been no serious injuries or loss of life.

Port Pirie was saved in that the wind eased and the town was saved from flooding although just down the road in Port Broughton, they were not so fortunate and there was a lot of flooding in that little township. I also hear that the Barossa and the Clare areas are flooded. There is serious flooding in many parts of Adelaide – houses and properties inundated.

Optus went down on Wednesday and has still not come back on again. Telstra is on and off and on again, then off. I just wish they would make up their minds. At the moment, it’s off again so no internet and no telephone calls, either mobile (cell) or landline.

All afternoon the clouds have been dark and it has gotten progressively colder as the afternoon wore on. It’s just coming up to 5pm and it has now been raining for the best part of half an hour. It just refuses to give up. Even as little 20-25 mm will be enough, given all that has gone before, to send many small rivers and creeks into flood. There is concern about the flooding of the Port Wakefield river. Normally this is a creek that has very little water in it, but given this volume of rain it can quickly become fairly aggressive as it gathers water from the surrounding catchment areas. If this happens it can flood quite quickly and cut off the main highway at one end of the town.  (It’s happened!!)

In Port Augusta there was a fair amount of structural and environmental damage and the Joy Baluch Bridge – the main bridge across the Gulf was closed because of its height and the danger of the  high winds. There is another crossing further up the gulf but it is a serious detour to Yorkeys Crossing and round the top of the gulf and back to the main highway.

At the bottom of the Eyre Peninsula, the city of Port Lincoln is still without electricity – or any power. Most of the food has gone and there are now concerns about potable water and there is also concern regarding the sewage systems. A modern Australian city and food relief packages are being flown in – like a third world country in crisis – bread, some package food, baby formula, milk, water etc.

The Smelter at Port Pirie took a hit and will be out of action for repairs for about two weeks. Arrium also took a hit and was forced to close down, at a cost of about six million a day. Andrew, my son, was called out to the mines at Middleback and he and a team were working frantically to avert a mining “catastrophe” (his words) – although what that was I have no idea – he did not

The clean-up and restoration will take weeks, if not months and there will be the usual “Blame Game” My own view is I don’t care about the politicians and their point scoring off each other, but I believe there should be an investigation into why these pylons came down as they did. Trees in the area were unaffected yet these steel pylons,  22 of them,  were bent in half as if they were child’s toys and not major carriers of high voltage electrical power lines.  I would also like to know, whether it’s good or bad, who supplied the steel for these things. But I think that might be something that we never get to know, but a state-wide failure that put 1.7 million people in darkness is something we should get to know.

Latest: As of 7am this morning the main highway north at Port Wakefield has been closed due to the flooding of the Wakefield River. There are major diversions in place through Two Wells and Virginia for cars, buses and light trucks. Heavy trucks are stuck.

Patience is one thing – having to put up with this constant ache is something else. I do not intend to play at being Gregory House, living on pain killers and a cane. But according to what I am being told everything is progressing well and the residual pain is to be expected for a while. Good Grief, I’m a grumpy, impatient patient!!  I don’t know why Benji puts up with me. Annabell – she who follows Rugby – tells me that rugby players are out for a while with a knee injury and it will take a while  for the discomfort to fade completely.

I have been looking at Therapy Dogs, South Australia and from what I can see Therapy Dogs are not hospital visitors. I don’t think they go into Hospitals at all – more people confined to their homes,  Retirement Homes,  Aged Care Facilities plus a list of other activities but , not that I can see, hospitals. Bit sad if that is the case.  I found their web site slightly confusing, but perhaps that’s just me. 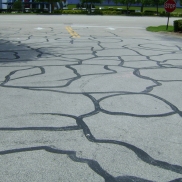 Couple of days ago there was a fatal car crash on the Port Wakefield Road. It is believed that the car may have been thrown off balance by a pothole. I use that road fairly regularly and  was there on Wednesday going down and Thursday coming home and for a main road north, it’s not the best. It needs some serious upgrade. Traveling down on Wednesday there were places where it was like driving over corrugated iron. Some genius came up with a new idea to make bad roads last longer – fill in the cracks with bitumen. Yes, it may well help to make the road last a bit longer but it makes for a very uncomfortable ride. That’s what they have been doing on the Port Wakefield Road but it is now widespread and the Council have been doing it here in a number of our roads – not pretty. It’s like a very old British TV show “Never Mind the Quality – Feel the Width”. Why not repair it – don’t be silly, that would mean diverting money away from  the South Road – or even worse – the Money Pit AKA The New Royal Adelaide Hospital. Although, having said that, they did go out and fill in the potholes that caused the accident.

Wednesday: According to all the weather reporters and forecasters we are about to get hit with the worst storm since the 1940s and it starts this afternoon. At this moment it is 7:40 and it is blue skies and sunny – no sign of any storm – hardly even a cloud. At the moment, as far as I can see, the storm is still out on the  Great Australian Bight and just looking at its predicted movement, it’s still a long way off. Apart from about 100+mm of rain winds almost up to hurricane intensity are forecast, so that should be interesting.

9 am – It begins.  The sun has gone, dark overheads clouds, rolling thunder and in the last few seconds, the rain has started.  Nothing much to be concerned with right at the moment. Been looking at the weather map and I think this is all going to pass below us. As far as I can make out there are actually two storm fronts, one coming down from the north and one moving in from

the  Bight. I think we will get a fair bit of the rain from both but the major front, the one coming in from the Bight will pass below us and hit Adelaide, the South East, Victoria and New South Wales. The one from the north – seems to be heading above us and into Queensland.

9:50. The rain is crashing down now and the noise in incredible. The thunder seems to have  gone for the moment and there is no wind whatsoever. Everything stopped for a while then it started up again bringing hail stones and heavy, crashing rain

Thursday: Shortly after that comment on Wednesday  we lost power. This was just restored about 45 minutes ago, so 24, cold, dark hours without power. As far as I can see  our location protected us from the worst of the storm. Yes, we had rain, hail wind like I have never seen before but

not as much damage as in other parts of the State. I have two trees down and I managed to start clearing one before the power went out and the saw was useless.  Other areas such as Blyth, really took a beating with major damage to property.  The  massive storm front brought down some 24 electricity pylons and damaged the grid in three areas leading to a state-wide blackout. Power was restored to some parts of Adelaide last night , we came back on line at 4:30 this afternoon but there are still about 50,000 without power further north. The news is that this storm front is not over yet and there is a forecast for more rain and high winds late this afternoon and into tonight. Right at the moment I am concentrating on making sure everything is charged up – just in case  :o)

Latest:  Reports of suggested evacuations of parts of Port Pirie as the water rises and threatens to flood the town..