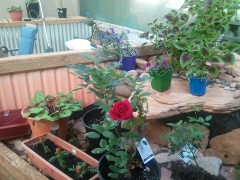 came round this morning to measure up the area and quote for doing the decking. Well, I cannot put decking in that  area without a major alteration of the whole pergola.  The distance from the ground to the roof sheeting  would be greatly reduced and it would mean tearing down the current pergola and rebuilding it to increase the clearance and give more headroom – and I am not willing, or prepared to do that. I will have to think of something to do with that area. However, it will have to wait its turn as I have enough to contend with at the moment with two projects on the go.

The weather has been fairly hot these last few days and I have been working, so not a lot has been done. The clocks have also gone back an hour so  it now gets dark earlier than it did last week. However after Thursday I will be on holiday for two weeks so I should be able to get much done. The tests that my wife did last week were clear, so that’s good.  I was going out after dinner for a little while but with the clocks going back an hour, it’s darker earlier. After Easter I will be on “official” holiday so I hope to get a fair amount of work done during these three weeks. I really want to get the front completed and I am anxious to see it finished. At the moment we seem to be having a late burst of heat with the temperatures hovering around 34c. That I don’t mind too much but in Australia heat generally means lots and lots of flies – something the holiday brochures don’t mention’. They say that after a few years you get used to them but I never have.  This photograph has nothing to do with gardens. It is a photograph of the interior of our small church in Whyalla, which is where my wife and I will spend much of the coming weekend.