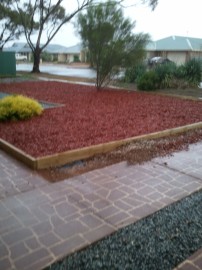 Since I am not working today and since it is dry for a change there are two things that I need to do. I need to get the unit cemented in place so that I can start work on the Washing line area as soon as it is practical to do so.  The crazy paving is just crazy and would take too much to fix it. I  would like to have it concreted over and if time permits tomorrow I might just see about that and how much it would cost. It may well be that the cost of cementing it would be less than the cost of what I wanted to do. We had a lot of visitors  yesterday and there were a number of little people. The dogs were not used to little people and were a bit wary at first but then they enjoyed the attention that they were getting. Chienna even allowed a little one to give her food – it’s food, why ever not?? Just as I was starting to relax and working out plans for the day – the telephone rang and I ended up working for the whole day. Oh well, tomorrow’s another day. And I was working that day too, and the day after that. I bought a  few roses and I have been planting them. I am planting them in bulk wherever I can on the  concept that some of them have to survive – I can’t kill them all off. I’m good but I’m not that good.  I still have not got the Standard Roses for the front and I was told by the garden  centre that it will be at least three weeks before them get them in – somewhere around the 20th June. There is also another place but same there nothing for a few weeks yet. The New Season Rose Bushes and Climbing Roses are in but not the standards.  Patience…..

Today is the first day of winter and to celebrate it rained for most of the morning. I think it’s going to be a long, cold and wet winter..